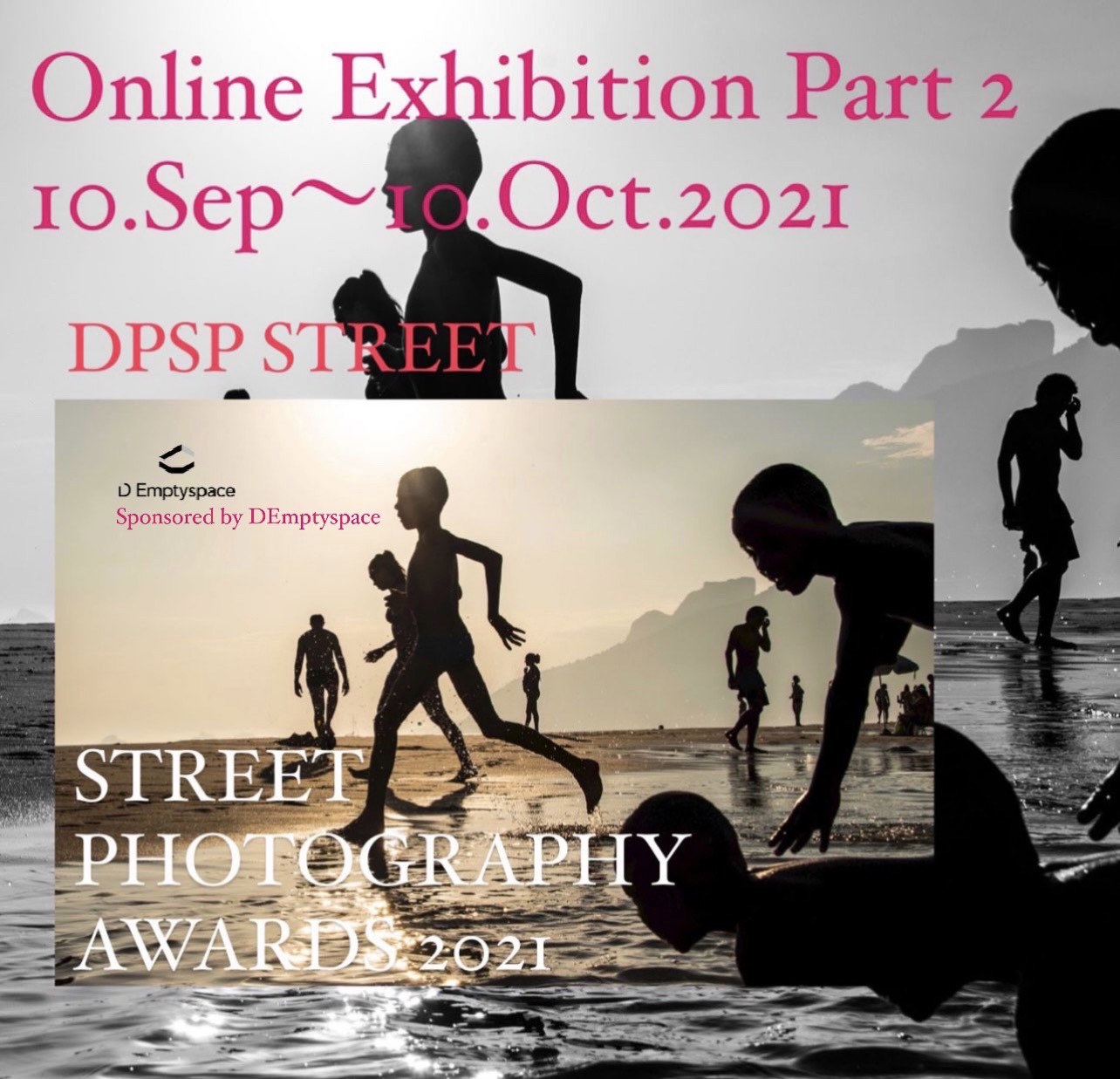 1. Swipe the space to explore the exhibition.

2. Click a wall or work to look closer. You can swipe a wall to see the next wall.

3. Click work on a wall to see the detailed information. 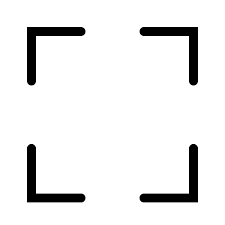 Explore the Exhibition in the App 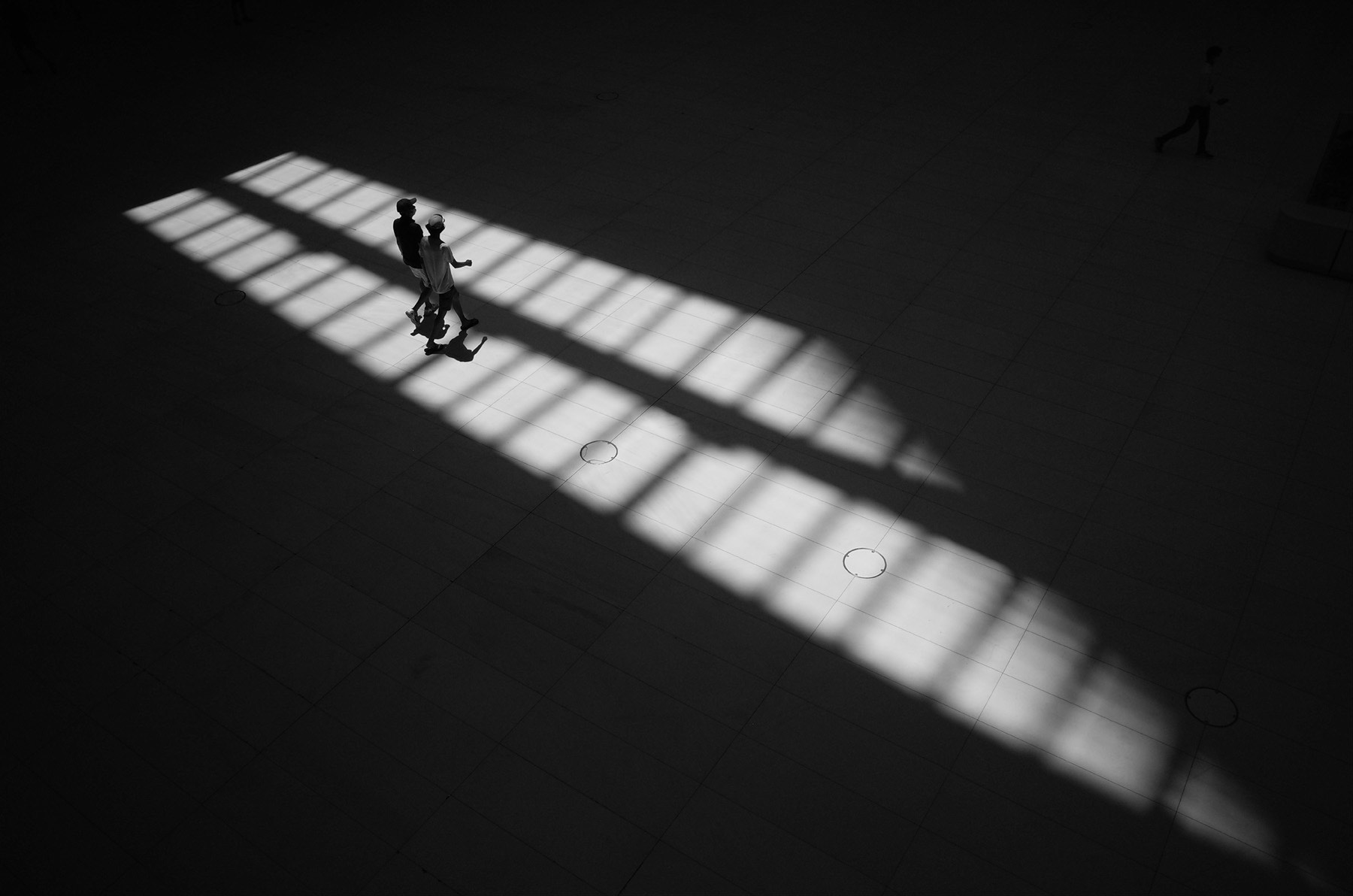 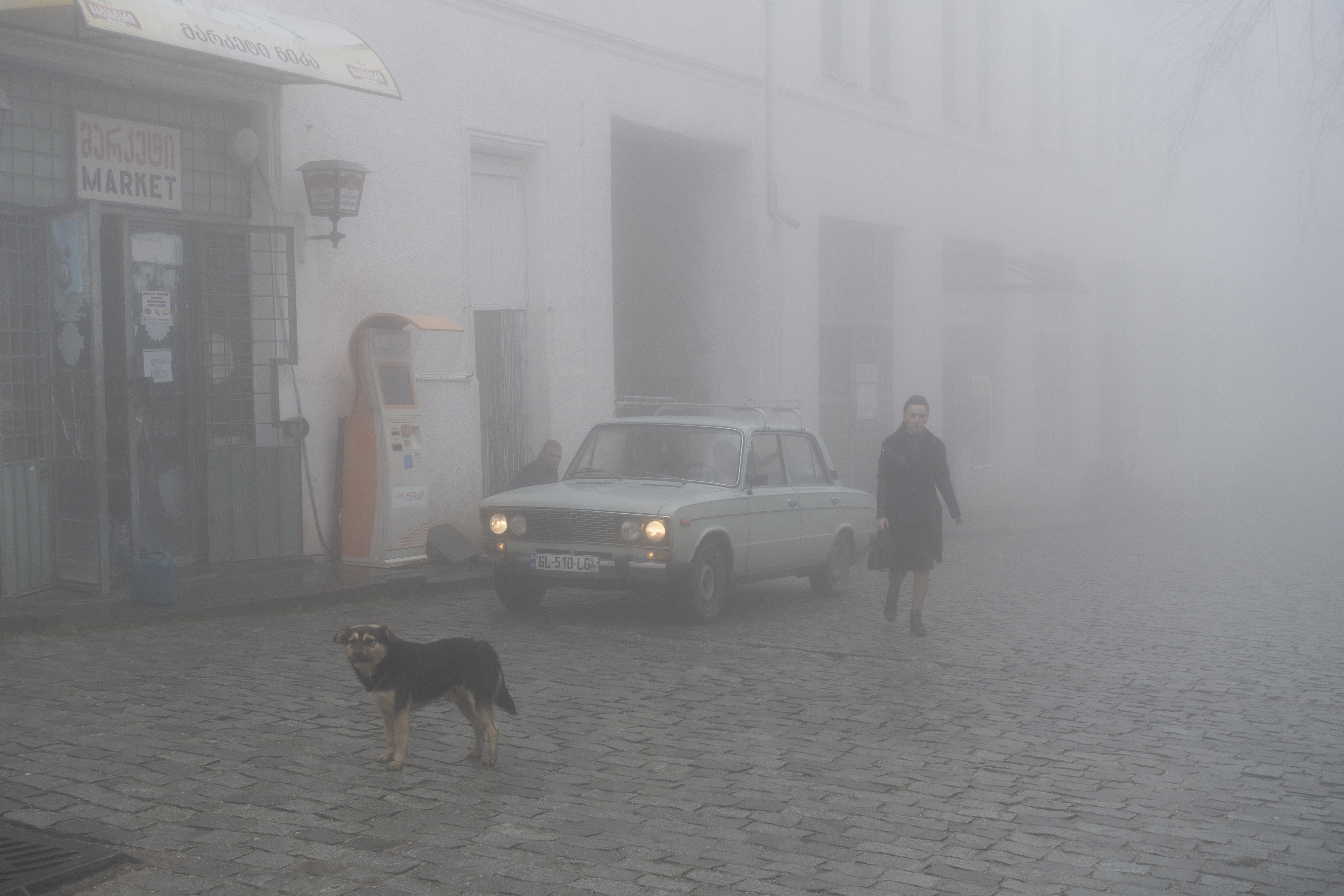 "One morning in March 2018, I arrived by bus in the small town of Sighnaghi (located in the wine region of Kakhetia) in Georgia. There was a thick fog and I couldn't see further than a hundred yards.

Just as I arrived and left my bag, I decided to go and explore the city. The atmosphere was ghostly; it was captivating and melancholic, but very photogenic.

I felt as if there was something to capture but couldn’t quite figure out what yet, as if time had stopped. I was feeling lonely. I took my camera out and walked through the few deserted streets to the main square, where I saw this lady emerging from nowhere out of the mist, next to an old car. The dog in the foreground created the only animation.

I had to capture it, inspired by this suspended moment of movement.” 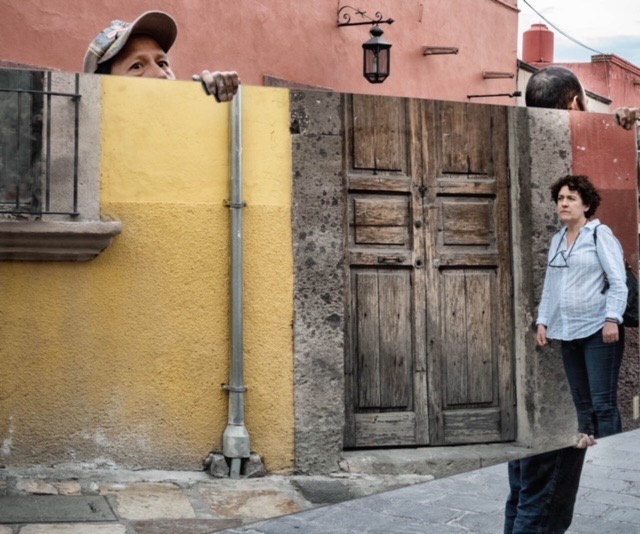 Life is always a reflection- we choose what to reflect upon. My reflection is watching the human interaction as life walks past us.  Henri Cartier-Bresson’s lesson of the decisive moment is what caught me in this moment. I saw the mirror and waited for the moment- she appeared out of the corner of my eye looking hesitant maybe deep in thought- me I went snap- and voila the moment was caught- 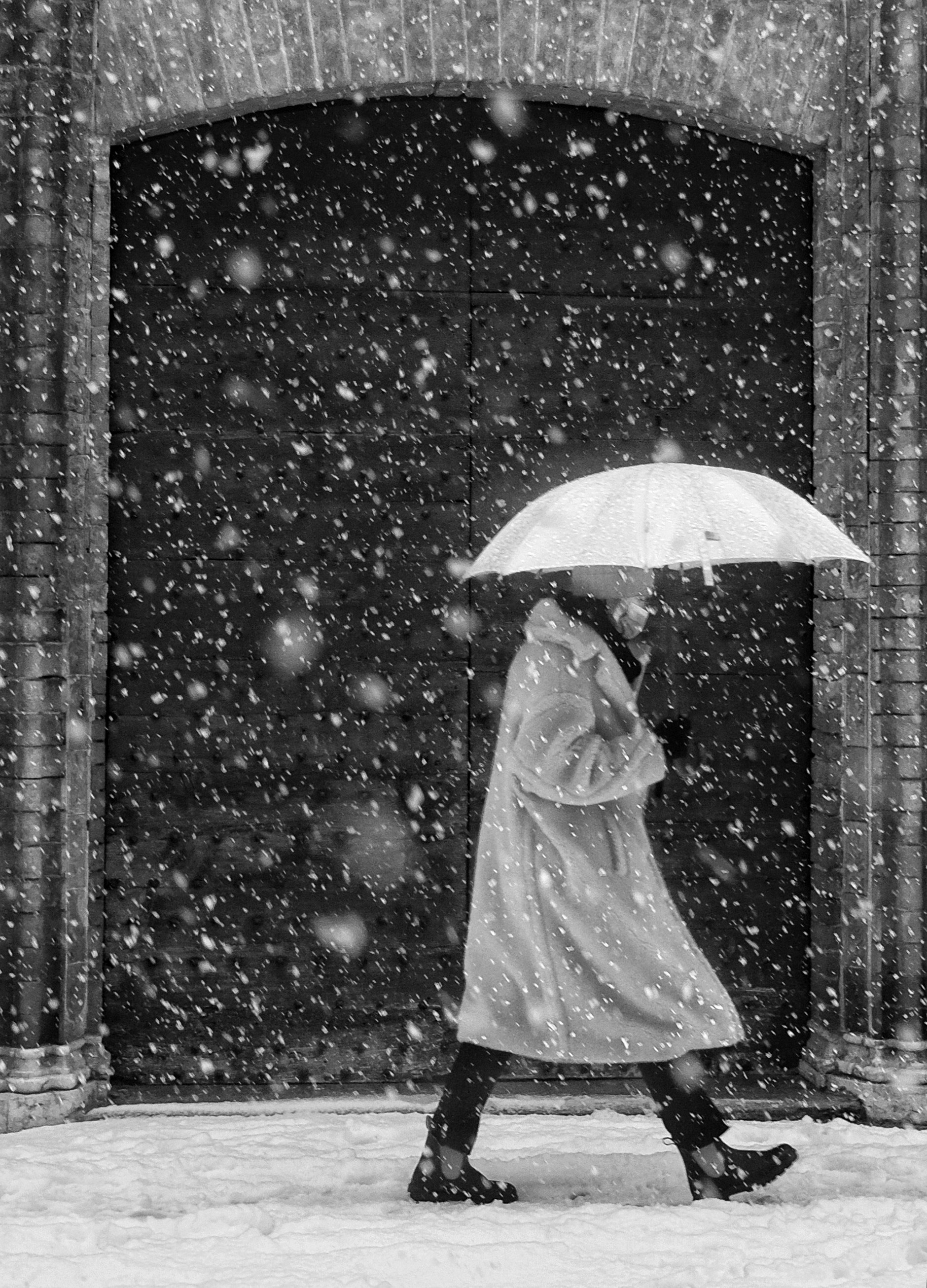 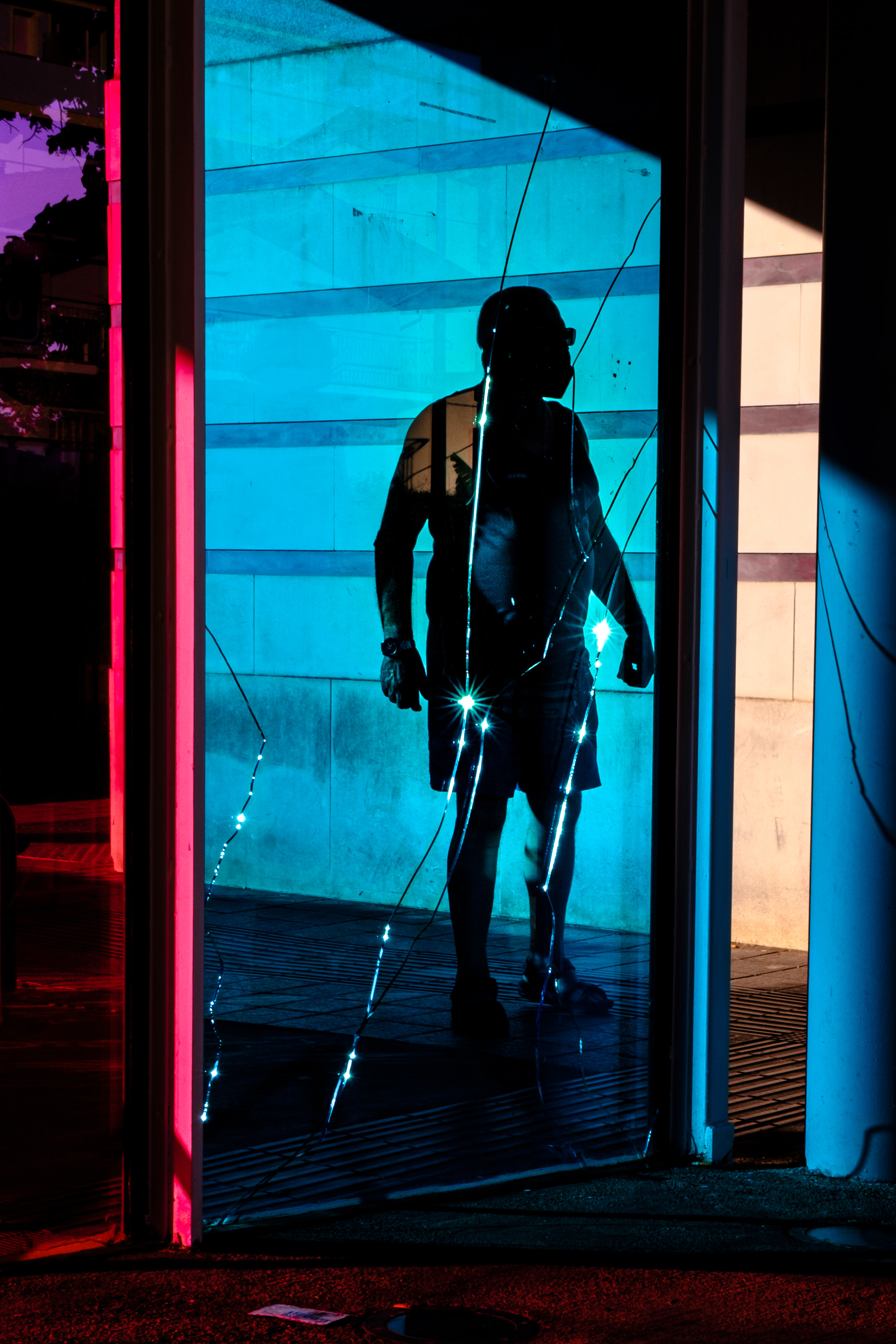 A future behind a screen 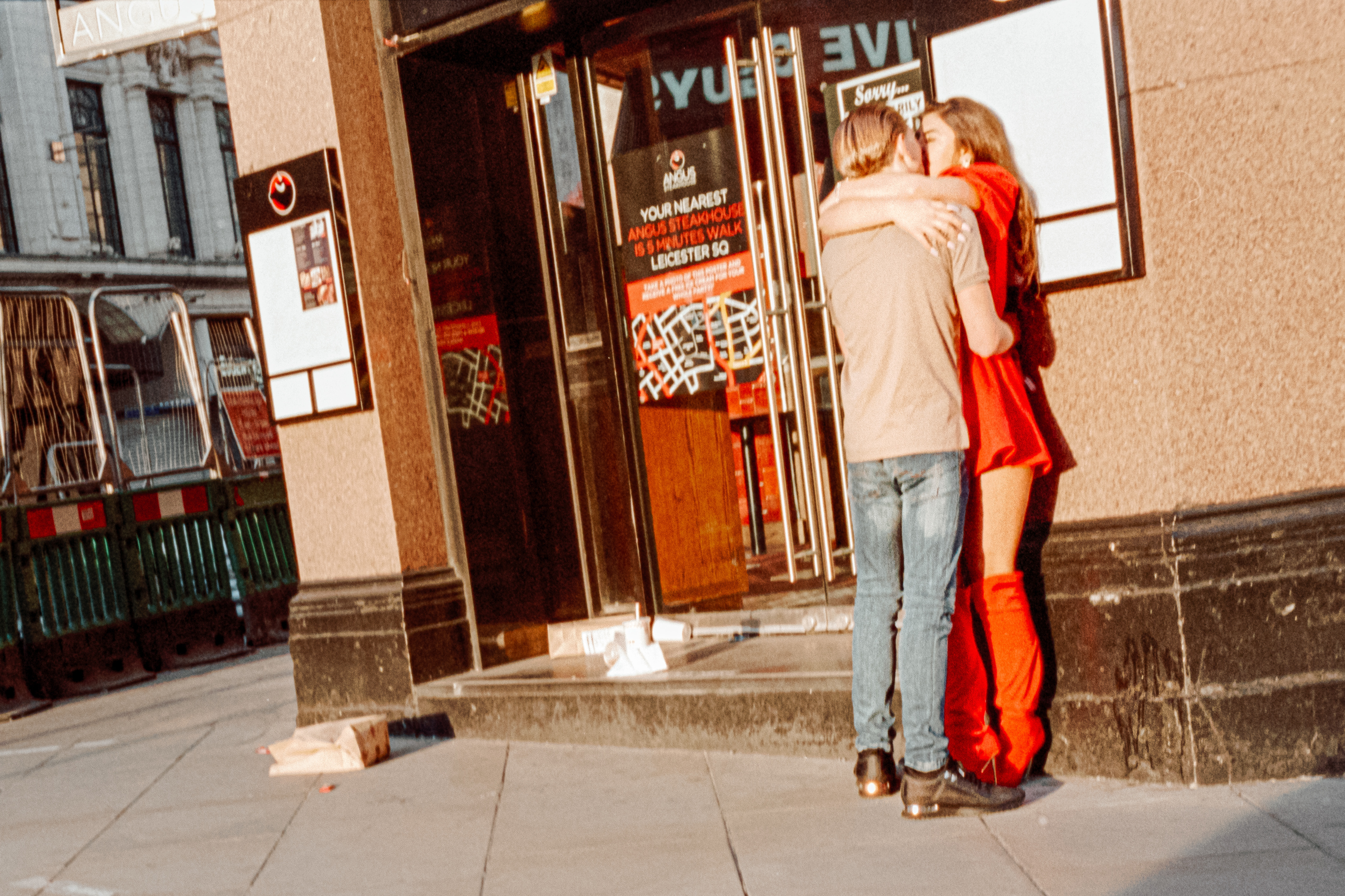 Title is “41 - London - 2021” (meaning the title is the whole thing, not just the number 41)
April 2021 and here in England the government has recently lifted covid restrictions. Youngsters flooding the streets of London, cheering up for a little bit of freedom after months of lockdown. I was in Piccadilly Circus for my regular  streetphotography walk when I stumbled upon this couple who, to me, represented all the youngsters there. 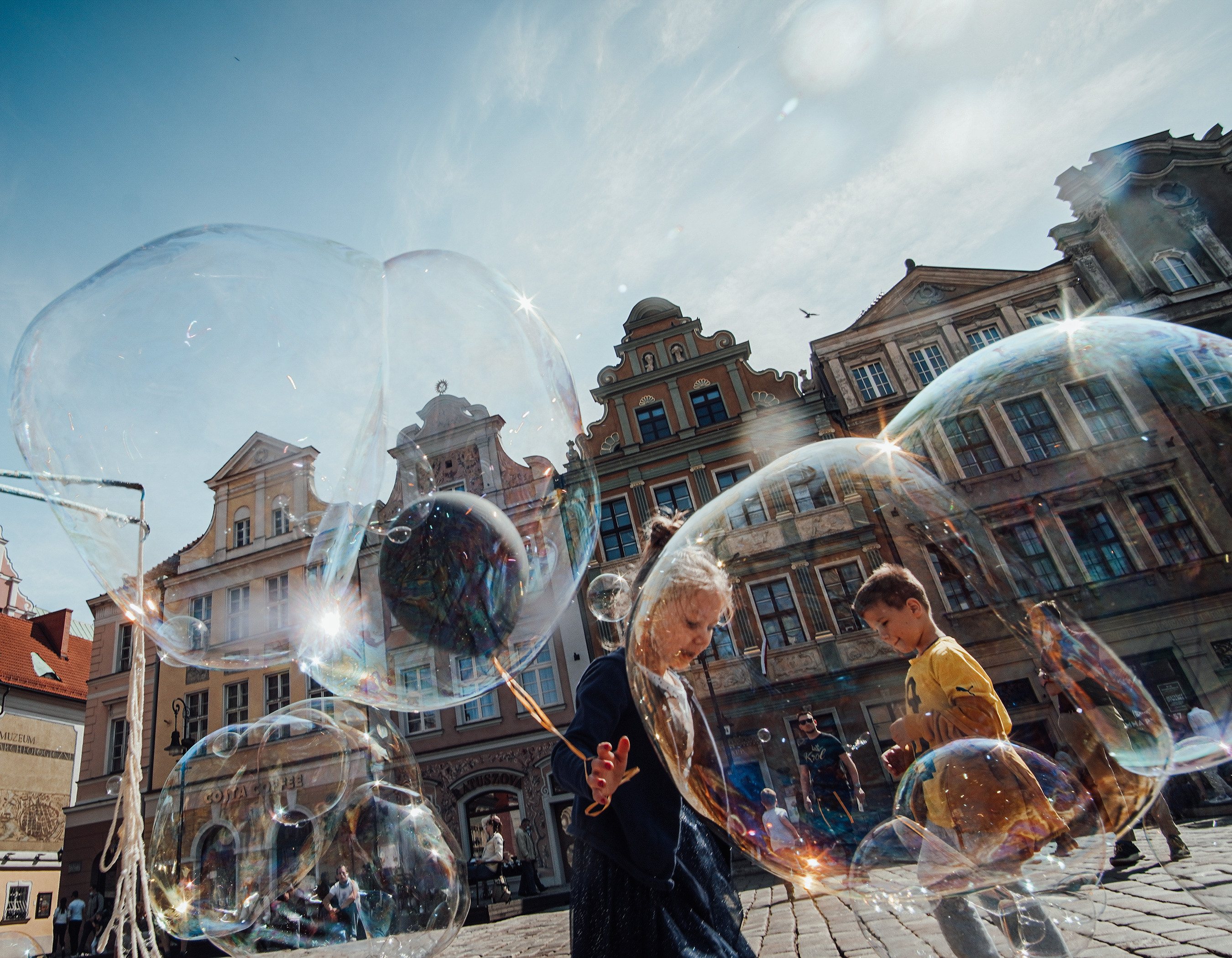 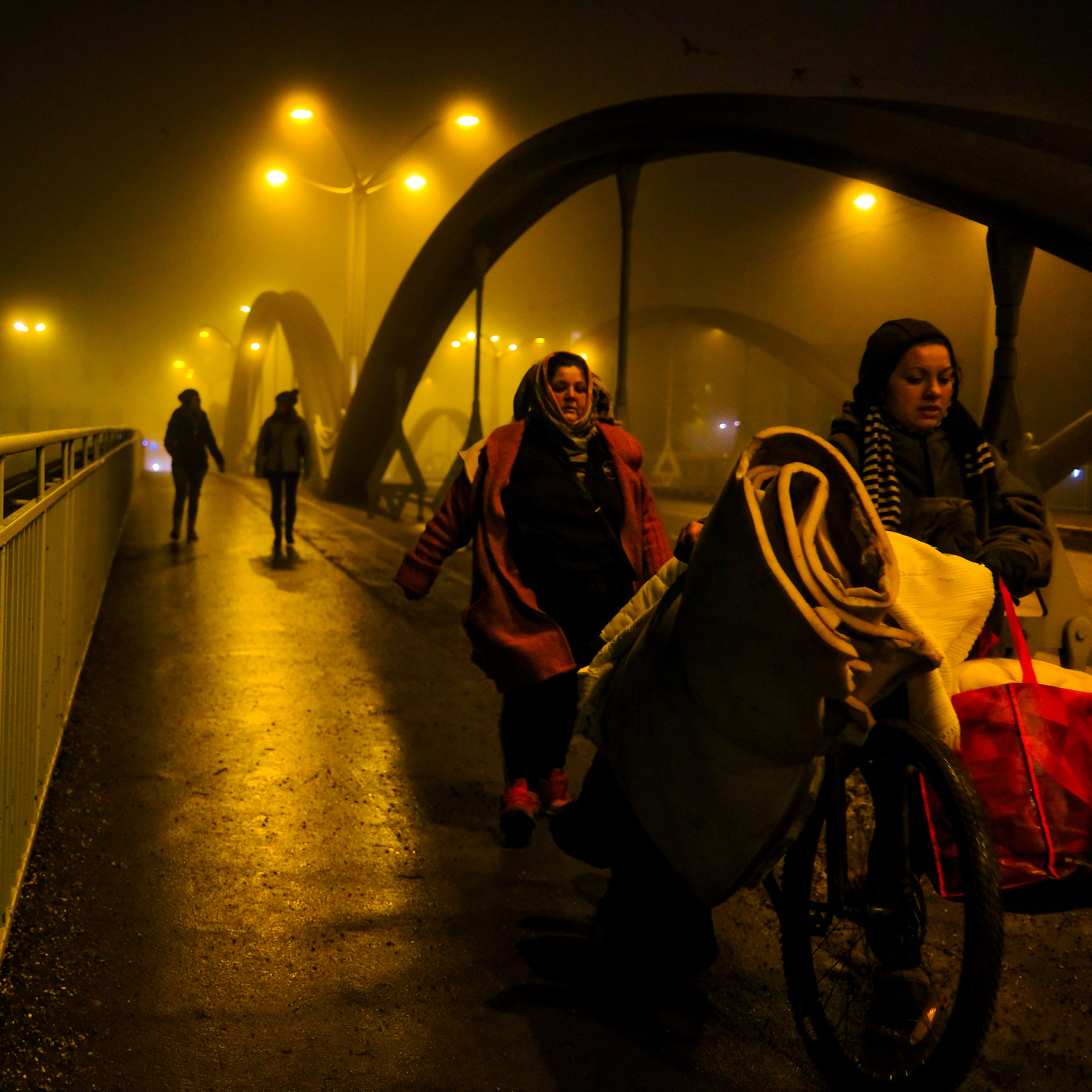 The picture was taken on December 18th 2020. It happened to be a foggy night. The softness of the air attracted me. In this winter the temperatures were not that low, but it felt colder, because of the fog. There were still COVID regulations in Austria and usually not many people on the street at night. I met this group of Romanians on the Karolinenbrücke / Caroline Bridge. My plan had been to capture the misty atmosphere, but then these people, carrying their beds through the night, attracted my attention. I reacted spontaneously and took some pictures of them passing by. The situation for homeless people was especially difficult in the last year. Because of the COVID regulations, there were not as many people allowed in the night shelter, as usual. While in the summer, it is not unusual, that people camp under bridges and by the river, but in the winter it can turn out to be a dangerous situation. 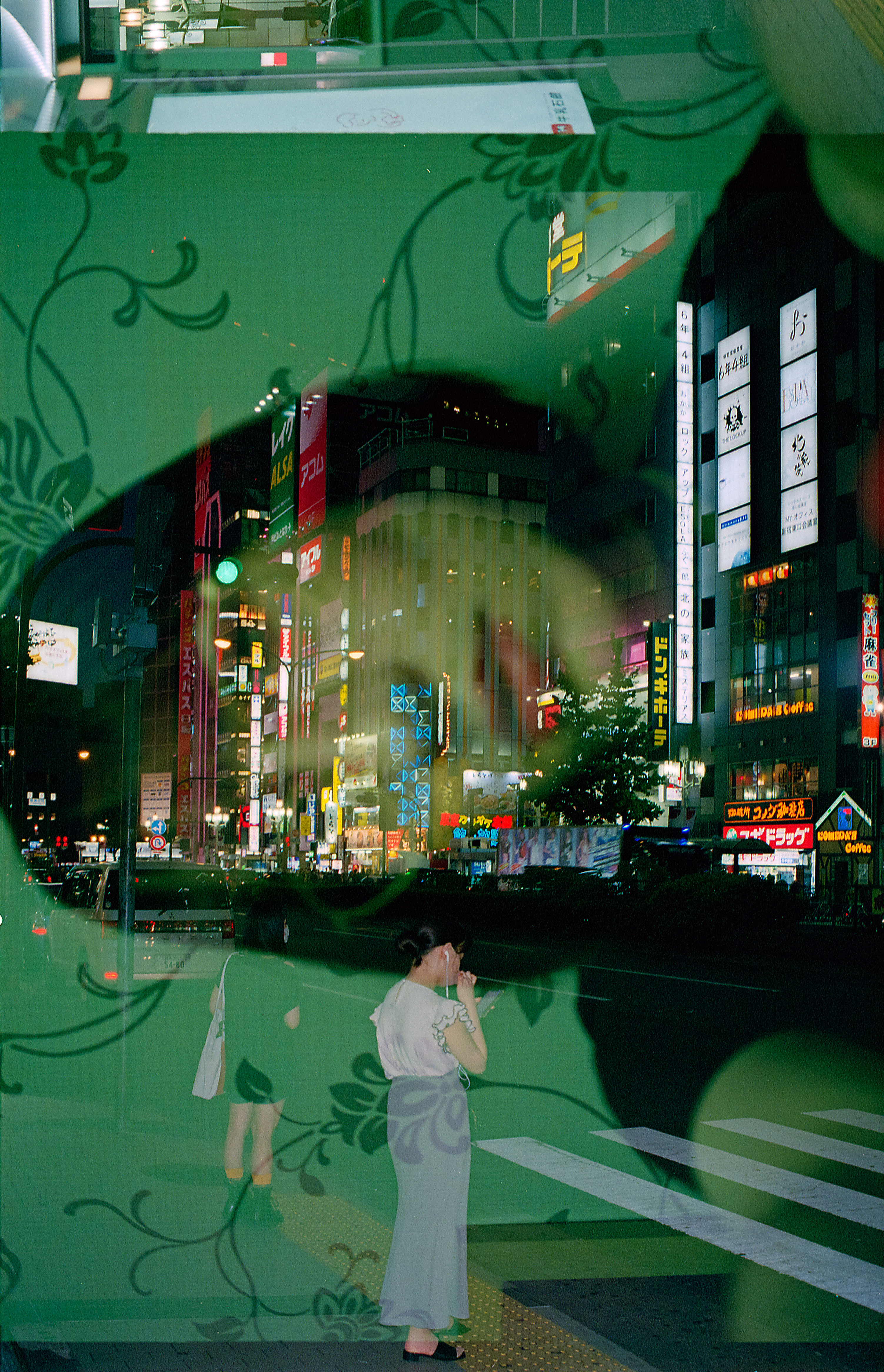 This picture is from my ongoing collection of double exposure film photographs shot with an Olympus IZM 300 film camera. Often using my own reflection as part of the photograph, the other part being an uncalculated shot, but somehow fitting nonetheless - showing desires, wishes, hopes. 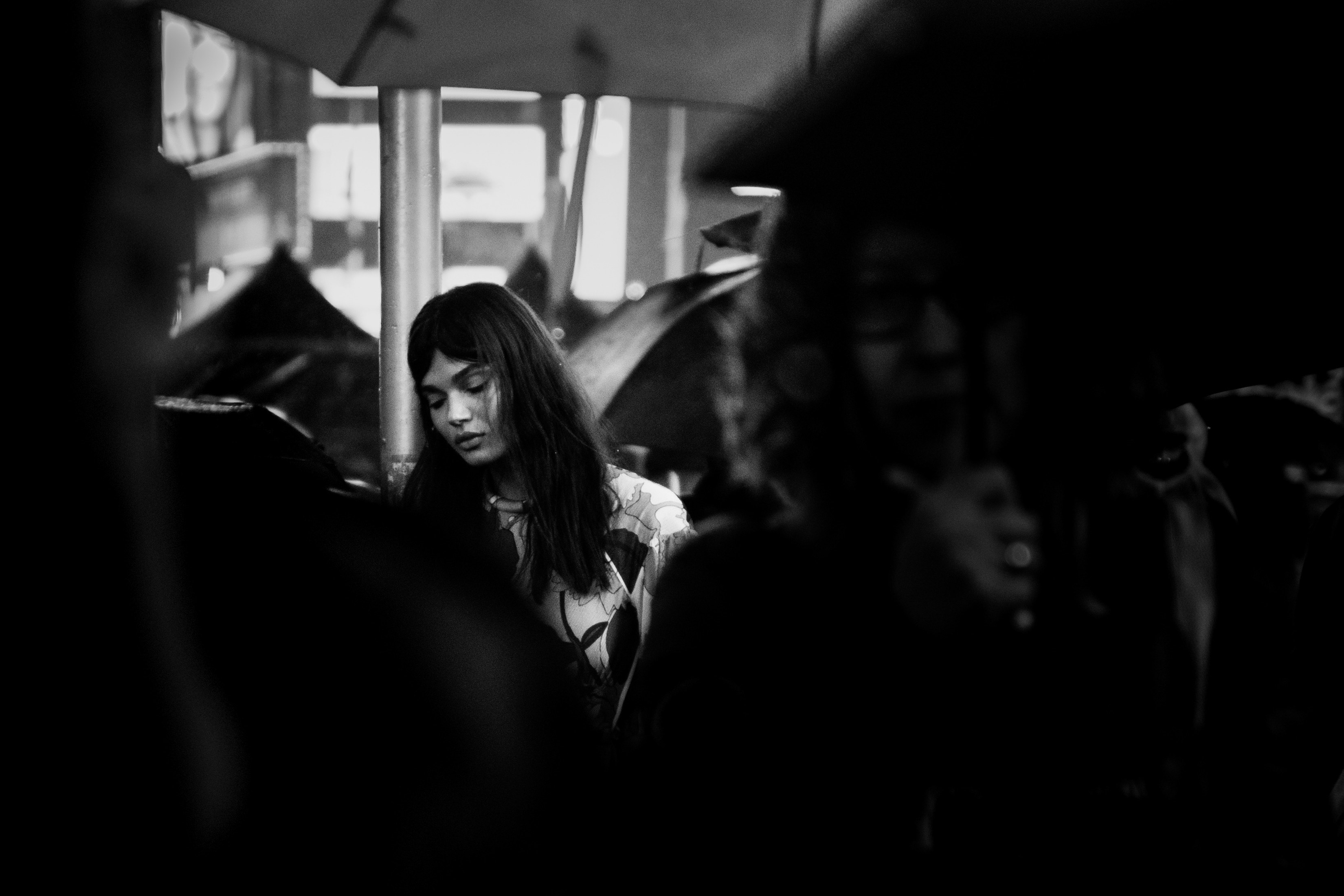 Waiting in the rain

As a street photographer I like to wander in big cities at night.

In December 2019, I was walking around in New York City. It was a busy evening and people were in a hurry to get out of the rain. While I was taking pictures close to Times Square I saw this lady, all dressed up, peacefully waiting under a shelter. She seemed unaware of the chaos around her, and not at all bothered by the bad weather.

I like to take candid portraits, capturing people in a natural spontaneous way. The lights and shadows in the streets at night ad contrast to black and white images, transforming ordinary events into special timeless moments. 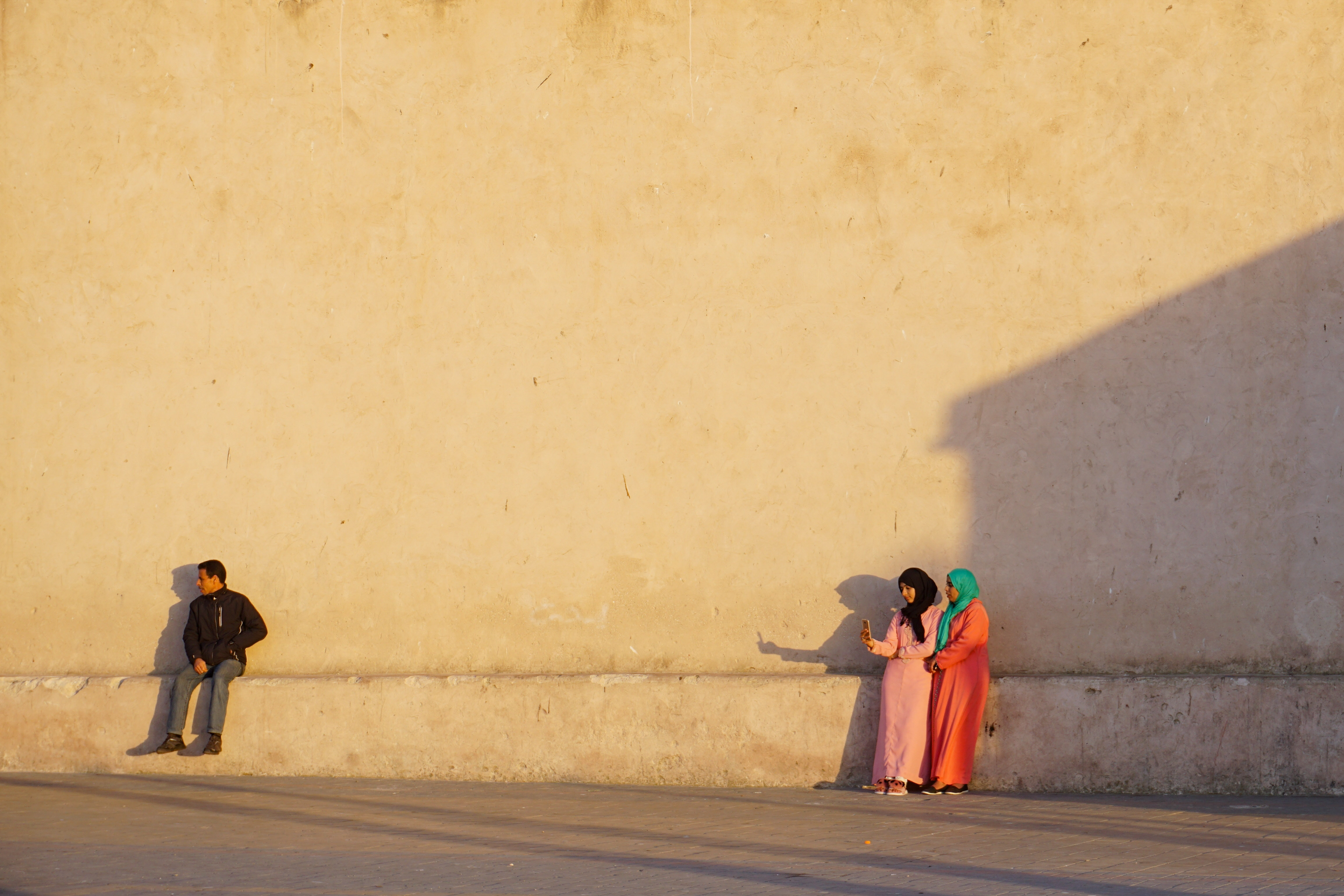 Attracted by the soft toned city wall of the Medina in Essaouira, Marrocco, I discovered this pituresque scene. I was struck by the fantastic colour combination and the strong shadows of the low sun. Approaching the scene, I saw what seemed like a flirtatious. moment between two girls and a young man. Two maroccan girls, dressed in beautifully coloured robes and headscarves, were standing in front of this wall with their heads together. To me, it seemed like an innocent attempt to attract attention and make contact with the young man who was leaning against the wall. The fact that he looked the other way could have been due to shyness.

But on closer inspection the reality was different, less romantic. The girls were just interested in their phones and taking selfies or viewing a video, showing no interest in the young man. Looking bored into the other direction, he also showed no interest in the girls.

„One eye sees, the other feels“ (Paul Klee) 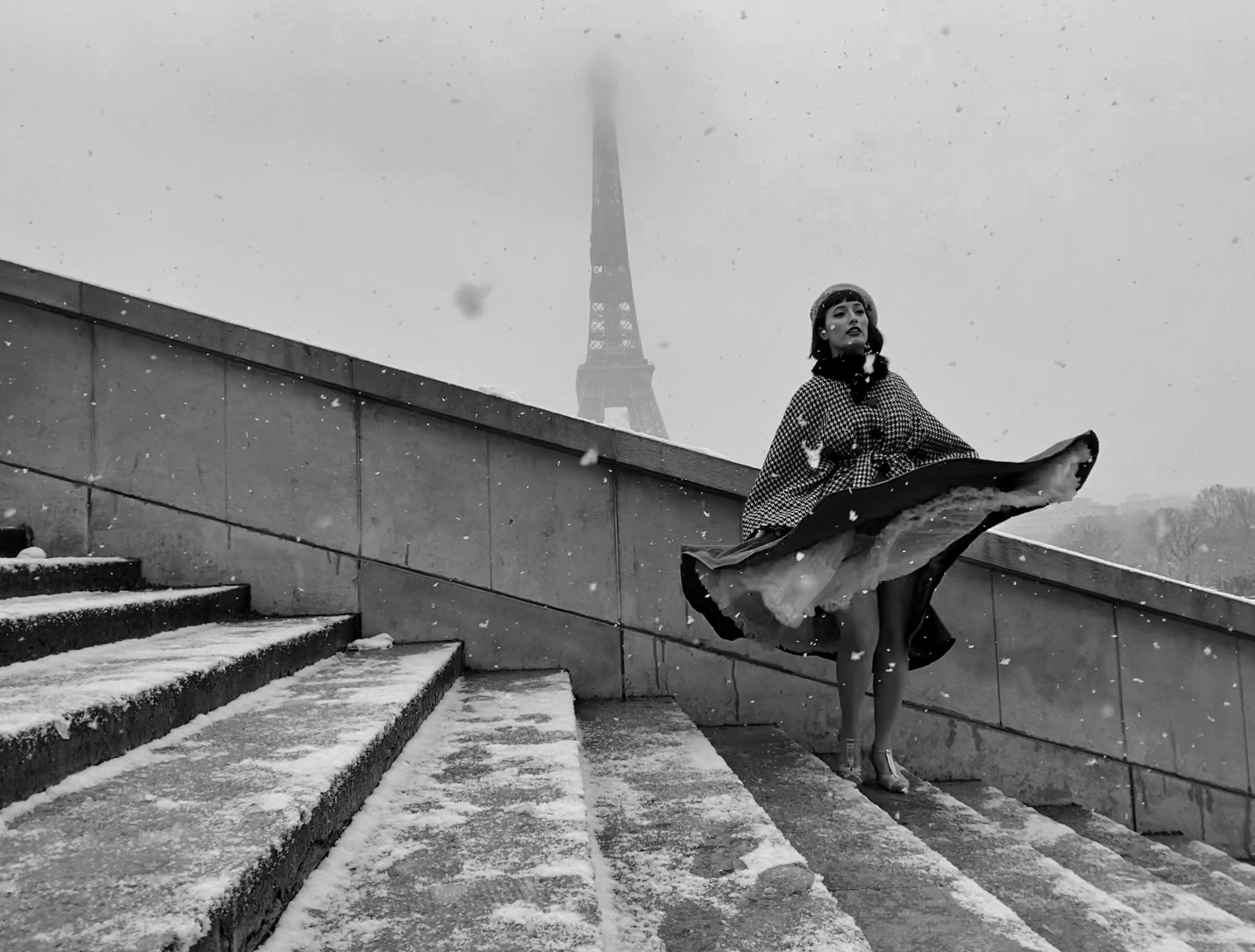 Dance with Me  paris
Description: During the quarantine period through a snowing day in paris , I found her an outstanding classic personage and reminds me about the 40th decade of the parisian that it ‘s oriented me for recording this magical moment. 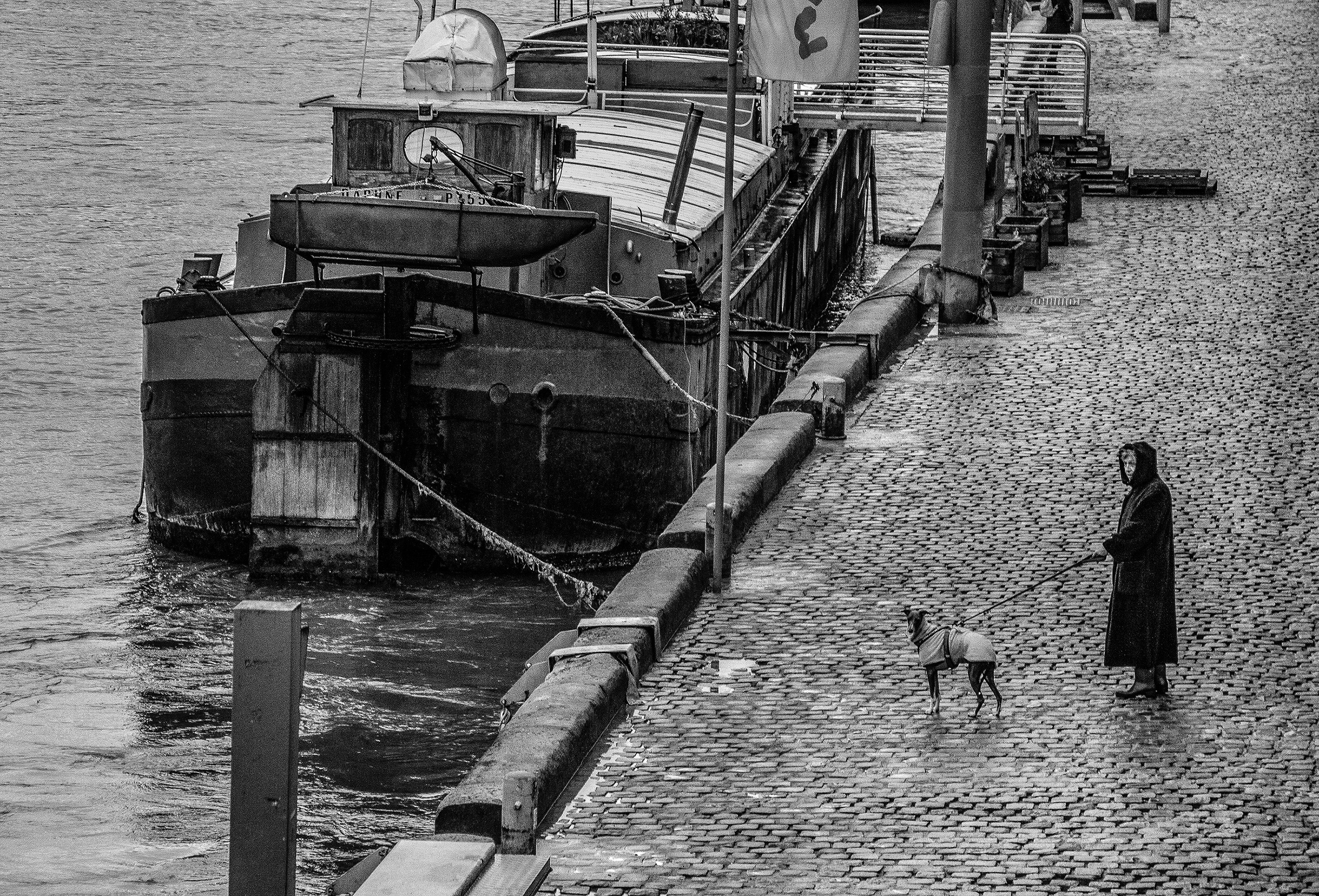 This photograph was taken at the end of winter three years ago in Paris. It is located on the banks of the Seine river and on the side of Notre-Dame cathedral. As I was walking on that rainy day from the top of a bridge I noticed at first great effects which the rain was bringing. A certain aesthetic thanks to details from the paving stones, the barge, and even the water of the river itself. Add to all that the two characters under a light rain, still not moving at all. A person and animal kept on a leash. Actually what really attracted my eyes, beside the aesthetical side of the scene, was up here something powerful as it was the two characters before everything else. The scene around them was actually a “detail” by now to me once my attention went to the two characters, which was bringing some visual touch to the living presences. They were “in phase” with one another I thought. Same kind of “attitude”. Both turning to one side their attention to something which I personally could not see from the place where I was standing and staring without being distracted. Whom from the two had first initiated that “wondering” staring attitude and standing-still attitude and influenced the other one, I thought. The other thing which attracted my attention about them was their protection against the rain. Both were wearing something to get protected from the light rain. As mentioned earlier they both were in phase and a connection was present between them. I said to myself that they look so much alike. I saw and felt up here something just powerfull by its simplicity and genuineness. There was no need for extra things. Two characters were up there as if some chaos was going on for they seemed to look amazed or surprised by something “strange” and also a kind of feel to see them somehow totally distraught to be under the rain. I was touched by the simplicity of the beautiful livingforms scene in front of me. The time stopped I felt in that moment. Everything was still like a painting as I was myself seeing and living and witnessing it too. 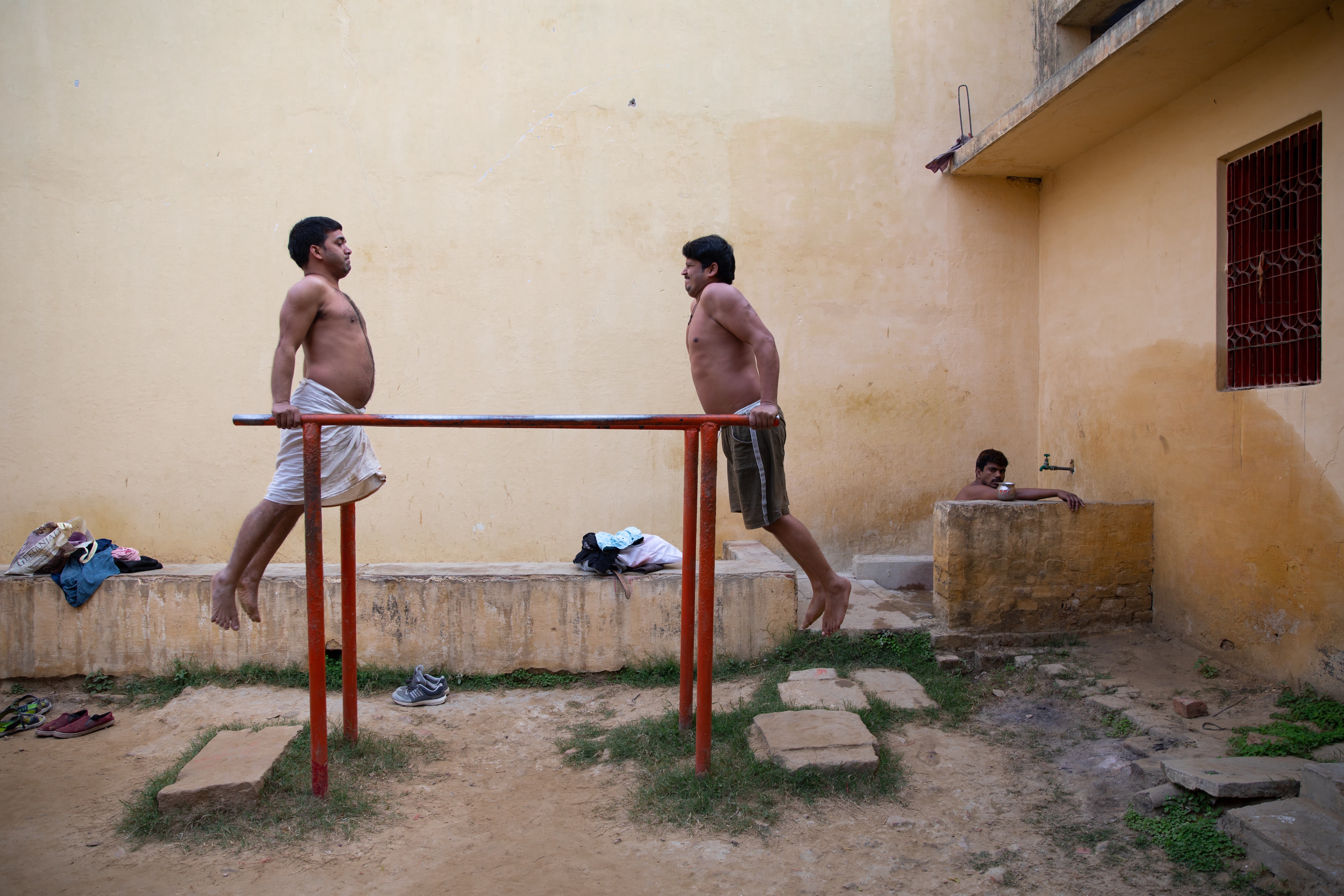 One early morning I watched the Kushti wrestlers in India practicing. I was fascinated how ambitiously they trained. There were different stations they completed to warm up every part of their body. The men on the high bar had particularly caught my attention. Each of them was exercising on their own, but in the way they were doing it, it was clear that even as they were warming up, it was about winning. The man at the tap looking at the other two men was a great addition. To me it seemed that he was annoyed by them. No one spoke a word and yet I could feel what each of the 3 men was thinking. They revealed themselves through their gestures and facial expressions. The location of this scene is Dolores Park, San Francisco.  I love going to this park during Spring and Summer weekends where you will see sun lovers devouring their appetizing picnics, jugglers and acrobats practicing and collaborating, interesting looking people walking or playing with their pets, and musicians creating pleasing rhythms and beats.  The city view from the top of the park is spectacular and well worth the walk. 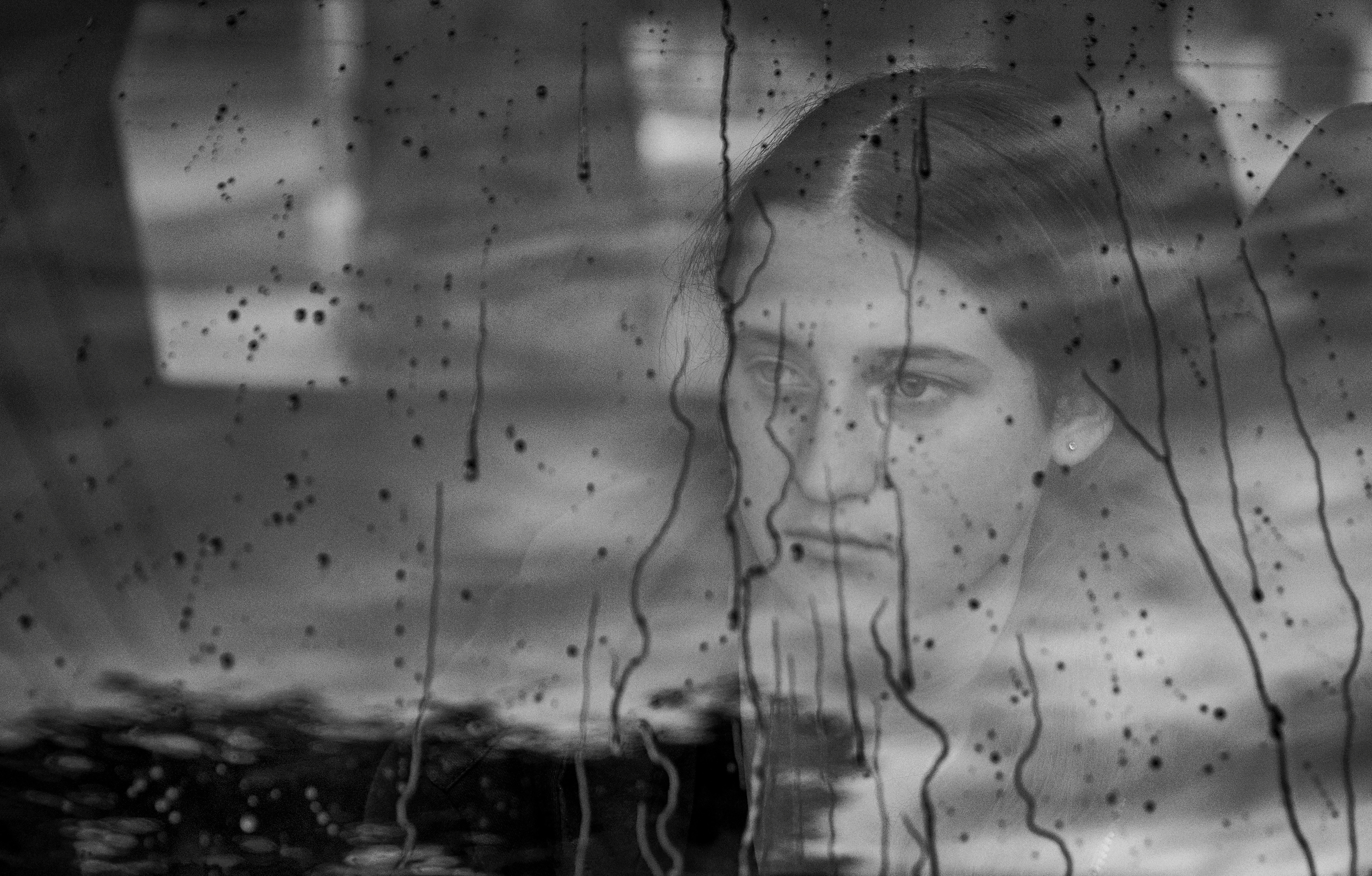 We were driving home from school one day and my daughter was really upset. When we arrived home, it was pouring with rain and she refused to get out of the car. She just sat forlornly, staring silently out of the window, as the rest of us ran inside. I quietly grabbed my camera, sneaking out to take this image of her. The rain falling down on the windows mimicked her tears and she was completely oblivious to my being there. I feel like this image perfectly captured her mood in that moment. 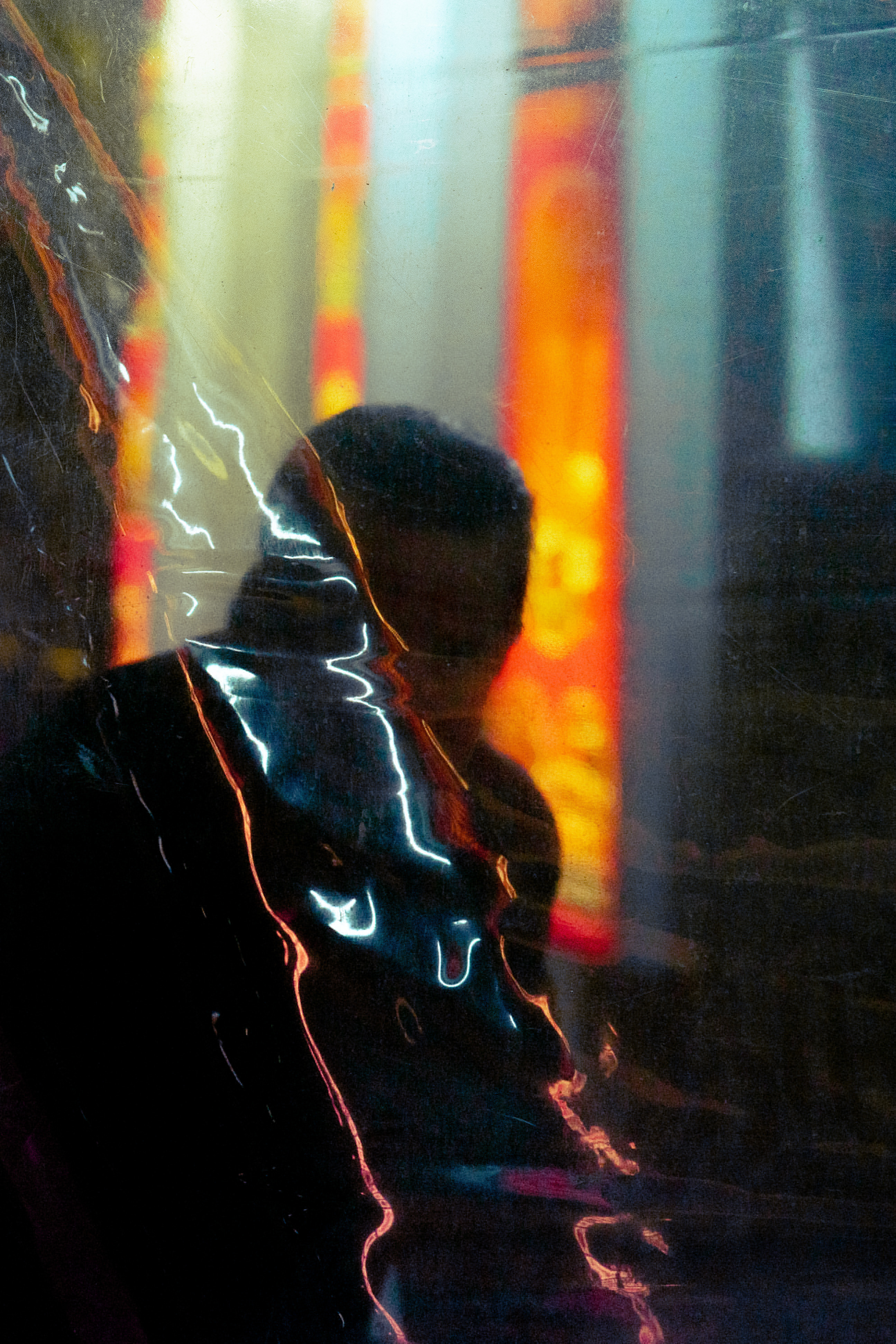 This shot was taken on a cold November night in the streets of Berlin. I spotted a bar which had one of these plastic sheets used to protect people from the cold and wind. There was a man standing just in front of a back-lit sign, which in combination with the transparent reflective layer, created the perfect contrast and textures I love. I like the fact that the identity of the man is hidden and that's not a clean silhouette since you can still see a bit of his hair, adding mystery and complementing the shapes and textures.

Dpsp street is an Instagram street collective feed founded in Japan by Keigo Nakamura in January 2017. This group consists of eight members, including Patty Jansen from the Netherlands, Seda ÜNNÜ from Turkey, Gaelle Elbaz from France, Antoinette Pionnier from France, Bayéré Zouzoua from France, Linda Hacker from the United States, Iris Maria from Rumania, and Curator Keigo Nakamura from Tokyo City Japan.

Three members have retired when Our feed started, and as of July 2021, the above members are active.  Each of our members creates works that are full of originality, and each has a different taste for photography.  But that's what made us grow as our feed was able to collect multiple genres of street photography and showcase some of the world's finest work. 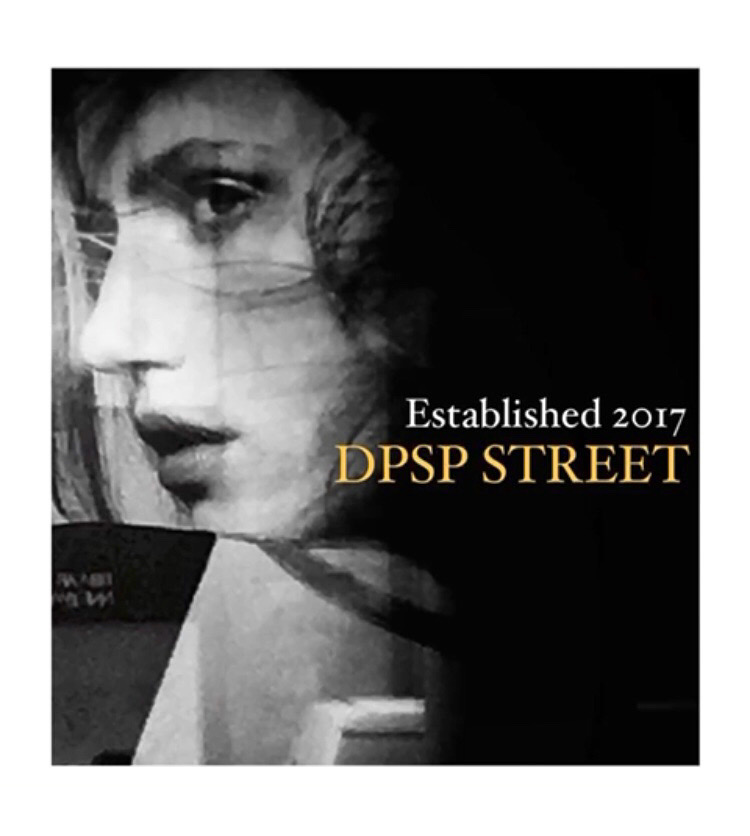